What do you do when you are pain, your dog is an itchy-maniac and nothing helps? I prayed, I searched, I cried, I kept trying. The glimmer of hope kept me going. July 2017 it dawned on me: my dog Sandy and I had an allergy to all cotton, not just genetically modified cotton.

My fibromyalgia syndrome surfaced in 1993, after a skiing accident. Pain, exhaustion, inability to exercise. Fibromyalgia is depressing and frustrating.

Over the years, I changed my diet — going organic, then vegan — de-stressed my life, consulted many types of health professionals and learned some of their skills, read many books. The fibromyalgia got unsteadily worse until 1999, when I had brain surgery. My life became convoluted, dealing with a cognitive disability that seemed to be an escalated hypersensitivity to light, sound, wind, with “frying out” into overload and pain. The fibromyalgia abated, then surged.

With each bout of pain, I took another life force energy course, practiced more, read more, delved deeper into myself. Why did the pain keep coming back? What did I have to do to kick this?

My beloved dogs helped. Taking naps on the couch, one dog curled at my feet, another by my shoulders, were my solution to pain. Instead of taking pain killers, I napped, sometimes for hours. I rigged a sleep-station for rests at work, too. 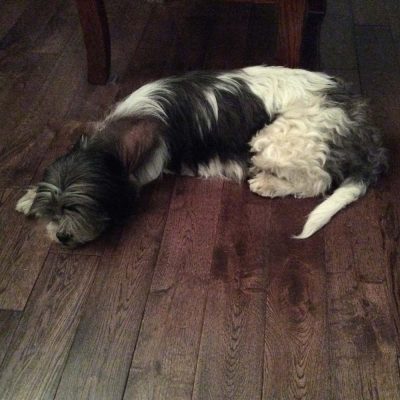 Sandy, our second dog, had ear infections from day one in 2004. After a few years, only one costly medicine kept the infection at bay, and in 2010 it stopped working. He scratched and scratched. The hair at his throat disappeared. He scratched until he bled. His skin turned black in patches and scabbed and flaked. He lost more and more hair. His tail turned into a bald rat-tail.

We tried so many things, different vets, alternative medicines. Many friends and family had ideas that we tried, but to no avail. Each solution appeared to help for a few weeks, then Sandy’s symptoms would re-appear.

He would get some hair, then it fell out again in clumps. We put him on a 24-hour watch. He slept beside me with my hand on him, pouring in love. On good nights, I slept. On bad nights, I was woken ten to 20 times by Sandy’s frantic scratching fits that lasted thirty minutes or more. With really bad bouts, my husband and I took turns sleeping.

I was accident prone, tripping, bumping, dropping things. My fibromyalgia seemed to increase the pain of sprained joints and  of the resulting physiotherapy treatments.

Barbara Brennan, the founder of the Barbara Brennan School of Healing, mentioned in one of our classes that since she had started doing life force energy work, she could not wear synthetics, so I started reading the labels on my clothing. But my fibromyalgia did not improve, nor did Sandy’s skin or ears. His tear ducts stopped working. We spent more money on vets, but Sandy still scratched.

I took more courses, adding medical qigong. Traditional Chinese Medicine together with the skills learned at the Barbara Brennan School provided me with a framework to examine my fibromyalgia and Sandy’s illness.

What was happening to us? Somehow, our bodies and our life force energy fields were not staying whole. They were leaking and breaking like shattered glass. When Sandy or I received a treatment in Reiki, Jin Shin Jyutsu or Brennan Healing Science, our life force energy systems received the flows, adjusted, then faltered and broke. We seemed to be unable to hold onto the energy that we were receiving.

All these alternative modalities that I had learned held the underlying assumption that our systems could heal themselves. Sandy and I were doing the right things — why were we not getting better?

In fall of 2014 my husband placed a cast iron frying pan on the top of the fridge. I opened the fridge door and the frying pan fell on my left wrist. Nothing broken, but I yelled and my wrist and arm hurt like mad. I did nothing about it until a few months later when I woke up one morning and could not lift a teaspoon with my left arm. As I kept on “doing,” the damage escalated until I had tendonitis in both shoulders, elbows, wrists and all fingers combined with a fibromyalgia attack.

Something clicked. These last two courses were like the pieces in a puzzle that gave me the lens to look more fully at myself, my dog and others. I worked with my husband and a few friends, drawing what I saw, writing what I sensed. I assembled material into a course, and we practiced.

I taught all of us to discern the different types of life force energy, especially that associated with breathing, and big shifts started happening with all of us. One person found healers and specialists to get to the bottom of her breathing problems, my husband started seeing a chiropractor, and I started having the strength to exercise.

The treatments I gave became more focussed, for example, helping a friend to shift kidney pain in a crisis. My body straightened, my breathing deepened, and I became stronger. I was able to exercise without the familiar after-pain of fibromyalgia.

As I was walking up and down the stairs in 2015, the outsides of my thighs started to burn as if on fire. The seams! My shorts were sewn with synthetic thread.

I searched for clothing that was 100% natural and could not find it. Plastic buttons, cotton blends in zippers, facings, thread blends used for sewing.  So, I started cutting these things out of my clothing, for example replacing plastic buttons with metal ones. I started altering or making my own clothing using organic cotton thread.

My body was increasing in sensitivity. My hands burned if I held synthetics or plastics for any length of time, even grocery bags or other carriers, my palms turning burning red after a few minutes.

I discovered that silk, wool, cashmere and other animal fibres acted like a barrier to protect me from the exhausting effects of artificial lights and the burning effects of artificial materials.  Sensing in, it seemed it was because these animal-based natural fabrics had a denser, thicker, faster energy field that provided space for my life force energy field to flow next to my skin.

I was feeling better, but Sandy had not improved, still itching and flaking terribly. In summer 2016 my back went out and my un-friend, fibromyalgia, returned, as did my frustration and depression. I overheard someone talk about genetically modified (GMO) cotton — that soon we would not be able to buy any normal cotton anymore, and it lingered in the back of my mind. I searched online and what I read horrified me.

GMO cotton purportedly resulted in breathing problems and skin problems with cotton farmers in India. Hundreds of thousands of farmers there had committed suicide as the GMO seeds did not perform as they expected, they got sick, or could not afford the increased pesticide costs.

Was this the root of Sandy’s problems? GMO cotton? By dousing with a pendulum, I learned to distinguish between natural and GMO cotton. Not surprisingly, the sheets and towels I did not want to use and the clothing I did not like to wear ended up being GMO cotton. Sadly, most of the towels that Sandy had been sleeping on were GMO cotton. Over an intense period of several days, my hands started burning when I handled GMO cotton, so I did not need to use the pendulum any more — I had my own burn test!

Within two weeks of sleeping on wool blankets instead of cotton towels, Sandy’s massive skin scabbing and shedding stopped. I was so thankful.

Slowly, his skin improved, very slowly. How could we help him? My husband had found pascalite clay online, looking for a cataract remedy, but it was supposed to be good for the skin. Every night, Sandy gets a thin watery clay mixture applied to his skin. His tail has grown back hair, he has tummy hair again, and a lot of his hair was growing in. He scabbed at his back and hip and shoulder joints for a while, then that stopped too. His black skin was lightening and turning grey or pink. His ear infection persisted, as did the mucus in his eyes from non-functioning tear ducts. His neck was still mostly bald.

In summer of 2017 I started getting rashes around my ankles. I put some pascalite on them, and started wearing wool socks more regularly. Then, even when Sandy was sleeping well, I started waking up at night, ten times and more. In July 2017, I developed a huge, red, dry burning rash on my right inner thigh. The words “no cotton” were in my head when I woke up, but I had been thinking it was for Sandy. When he sat with my sons I would ask them to put a wool blanket on their laps, because they did not believe in my “GMO cotton thing.”

Was the “no cotton” message for me?

My clothing that I had made was assembled using undyed organic cotton thread. My pants (like other normal pants) had seams at the ankle and the inner leg. When Sandy sat on my chair with me, he nestled against the inside of my right leg, where I had used serging to finish off the seams (creating a dense thread zigzag against my skin).

Cotton! I was allergic to ALL cotton, not just GMO cotton! What had hidden it was the fact that when I was at home I had been wearing my clothing inside out since the seams irritated me. I love to wear wool, merino wool and cashmere. Even my undergarments are made of these fabrics. I have been finding cotton stifling, and not wearing it.

Over three days I urgently assembled linen and wool clothing for myself using silk thread. I created new merino wool interlock undergarments also using silk thread. I took a closer look at our organic rubber mattress. It was encased in two layers of organic cotton sewn with synthetic threads. One of the covers had a zipper running around the edge of the entire mattress. My husband and I pulled and cut these off. I cut out the organic cotton threads from the wool mattress cover, wool pillow covers and linen sheet set that I had made, replacing these with silk. Immediately, my rash subsided and then disappeared. My breathing was easier and I was able to sleep through the night without waking.

Thank-you for this understanding about how my body works. What a long, convoluted journey, the discovery of Sandy’s and my cotton allergy has been.

6 responses to “Discovering Our Cotton Allergy”